Learn more about the history of Mercedes Benz, the historical vehicles and personalities.

How it all Began 1834: Gottlieb Daimler.

‘It’s not the idea, it’s the implementation that counts.’

Gottlieb Daimler is born on 17 March 1834 in Schorndorf. After completing various technical activities in France and England, he is appointed workshop inspector in a machine tool factory in Reutlingen, where he meets Wilhelm Maybach in 1865. In 1872, he becomes Technical Director of the gas engine manufacturer Deutz Gasmotorenfabrik, where he becomes familiar with Otto’s four-stroke technology. After differences with the Managing Director, he leaves the company in 1882. Daimler sets up a development workshop in his greenhouse at his Cannstatt villa. Working with Wilhelm Maybach in 1884, he develops an internal combustion engine known today as the ‘Grandfather Clock’. With its compact, low-weight design, the machine forms the basis for installation in a vehicle. The costs of trial operations soon consume Daimler’s entire fortune, however, so he is obliged to find business partners. He founds ‘Daimler-Motoren-Gesellschaft’ on 28 November 1890 together with Max Duttenhofer and his business partner Wilhelm Lorenz. But while Duttenhofer wants to produce stationary engines, Daimler prefers to focus on vehicle production, and a dispute ensues.

After Wilhelm Maybach resigns in 1891 due to unacceptable terms of contract, Daimler resorts to a ruse. He continues to build engines with Maybach, but the patents are all in his name. The increasingly tense relationship with Duttenhofer and Lorenz lead them to exclude Daimler as a shareholder. A deterioration in finances leads to stagnating technical development, which prompts DMG to attempt to reinstate Maybach in 1895. He refuses, pointing out that he would not come back without Daimler. In the end, commercial pressures result in both of them returning to the company. Thanks to the Phoenix engine built by Maybach, the Daimler engine gains popularity abroad. A group of English industrialists are prepared to pay 350,000 Marks for licensing rights. Maybach is appointed Technical Director of DMG, and Gottlieb Daimler receives a position on the Technical Board and becomes the Inspector General of the Supervisory Board. The return of both men to DMG is an unexpected boost for the company. Gottlieb Daimler enjoys this rapid development for only a short period of time. He dies of heart disease on 6 March 1900.

Carl Benz is born in Karlsruhe on 25 November 1844. Despite living on limited financial means, his mother ensures that her son attends a grammar school and later studies mechanical engineering. In 1871, Carl Benz joins forces with ‘mechanician’ August Ritter to found his first company, ‘Carl Benz and August Ritter, Engineering Workshop’, in Mannheim. When Ritter emerges as an unreliable partner, Carl Benz is forced to pay him off using the dowry of his wife, Bertha Ringer, and runs the company alone. From 1878, Carl Benz works intensively on a gas-driven two-stroke engine to realize his vision of a ‘vehicle without horses’. After long and laborious attempts, he gets the engine running for the first time on New Year’s Eve in 1879. He founds the ‘Gasmotorenfabrik Mannheim’ (Mannheim Gas Engine Factory) as a shareholding company in October 1882. Benz’s share in the company amounts to a mere 5 per cent.

Benz leaves the company in January 1883 and joins forces with new business partners Max Rose and Friedrich Wilhelm Esslinger. They found the company Benz & Co. Rhine Gas Engine Factory Mannheim and launch the two-stroke ‘System Benz’ engine. business partners Rose and Esslinger become skeptical, and Carl Benz is once again faced with finding new investors. Julius Ganss and Friedrich von Fischer replacw Rose and Esslinger in May 1890. The combined business model of producing stationary and vehicle engines is a success. In 1912, Carl Benz resigns as Managing Director and transfers sole management control to his sons. On his 80th birthday, the ‘once ridiculed and misunderstood inventor,’ as he has been seen in the past, enjoys plaudits from around the world. In his last years (1926 to 1929), Carl Benz remains active as a Board Member of the new Daimler-Benz AG company. The automobile pioneer dies at his home in Ladenburg on 4 April 1929. 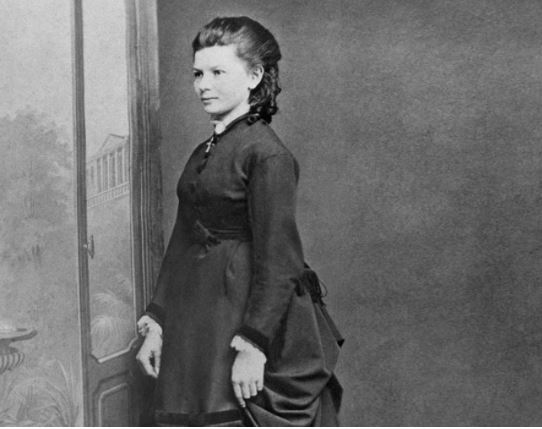 Bertha and Carl Benz marry on 20 July 1872. Benz later writes in his memoirs: “With this step, an idealist is at my side who knows what she wants, from the small and narrow to the grand, clear and vast.” Supporting all her husband’s activities and sharing his pioneering spirit, Bertha Benz turns out to be a key factor in the success of Carl Benz. She is the first person to undertake a long-distance journey with a petrol-driven automobile. To demonstrate the everyday suitability of the motor car in practice, she drives with her sons Eugen (15) and Richard (14) the 100 km distance from Mannheim to Pforzheim to visit her mother. Her vehicle is the third version of the “Patent Motor Car”, equipped with solid wood spoked wheels and a more powerful engine. Starting at daybreak and following an adventurous drive that requires considerable improvisational talent from Mrs. Benz and her sons on numerous occasions, the travellers arrive in Pforzheim. The return drive five days later leads through Bretten, Bruchsal and Schwetzingen back to Mannheim. The word of this sensation gets out in no time and Bertha Benz has achieved her goal. The critics now knew of the vehicle’s reliability and the Benz Patent Motor Car was the talk of the town.

The financial success of his gas engine factory secures Benz an economic basis, enabling him to devote himself to his vision of an engine-driven vehicle. But since his two-stroke engine is too large and too heavy to be installed in a vehicle, Benz puts all his efforts into the four-stroke principle. Just like Gottlieb Daimler and Wilhelm Maybach, he has to find a way to increase engine speed. And, just like the Cannstatt engineers, he focuses on ignition and valve control. Although his engine reaches a speed of “only” 400 rpm and is therefore less efficient than Daimler’s design, it already provides the necessary power to drive a “vehicle without horses”. Carl Benz demonstrates the full extent of his talents in developing the vehicle. Instead of installing his engine in an existing vehicle, he designs his motor car as an integrated independent construction. The primary assembly is the engine with a horizontal cylinder and large, horizontally mounted flywheel. Benz designs his innovative vehicle with three wheels because he is unhappy with the single-pivot steering used in carriages at the time. Testing begins in October 1885. On 29 January 1886, he takes a step of historical significance when he submits a patent application for his “vehicle with gas engine operation” to the Imperial Patent Office. The patent specification for DRP 37435 is recognized today as the “birth certificate” of the automobile and bears the name “Patent-Motorwagen” (“Patent Motor Car”) for the world’s first automobile. 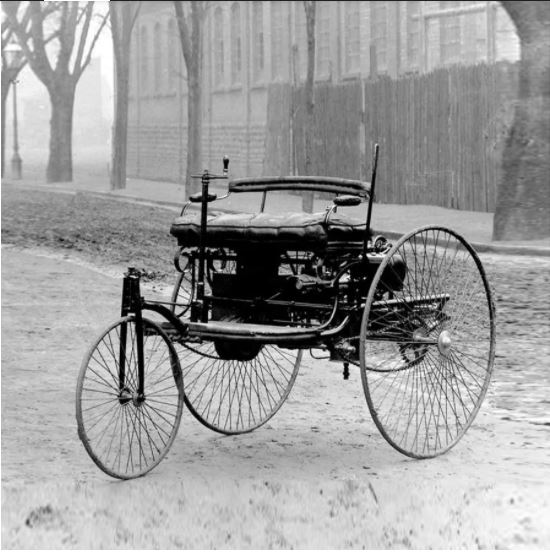 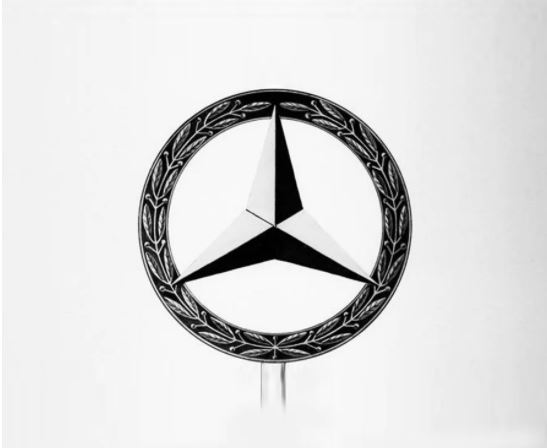 How it all Began 1909: The three-pointed star on all routes.

From September 1902 DMG holds the patent for successful “Mercedes” brand name. All that is missing is a characteristic trademark. That’s when the sons of Gottlieb Daimler, Paul and Adolf, remember, that their father previously used a star for a symbol. The DMG Board of Management follows this inspiration and in June 1909 registers both a three-pointed and four-pointed star as trademarks. Both logos are legally protected but it is the three-pointed star that is ultimately used and a three-dimensional star

The first contemporary automobile Due to his premature death, Gottlieb Daimler does not witness one of the most outstanding designs Maybach produced for the joint company. The first Mercedes generates great excitement at the “Nice Race Week” in March 1901. It is a powerful, lightweight vehicle with a low centre of gravity and stands out from all previously built cars. The 35 hp Mercedes is an independent automobile design. It signals the end for the carriages used in automobile manufacturing. The development of this pioneering design, which is considered to the first modern automobile, is not only attributed to the genius of Wilhelm Maybach, but also to the initiative of Emil Jellinek. 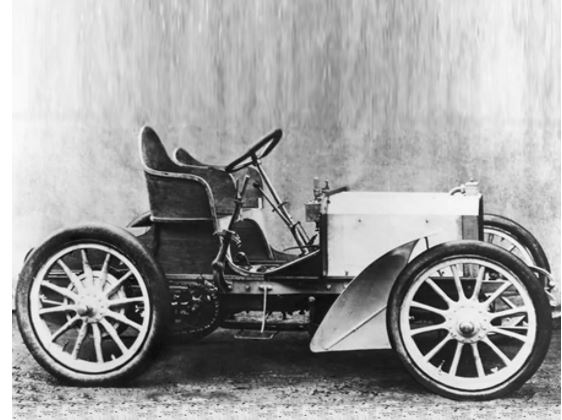